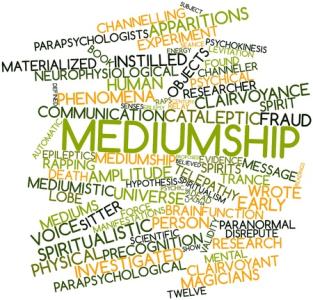 And How Can They Be Explained In Terms Of Quantum Physics?

Today we are discussing the question of what is a psychic medium with relation to science specifically Quantum Physics. A psychic medium, of course, is an individual who knows how to talk to the dead and can communicate with the spirits of loved ones. Mediums are usually sought after by the friends and families still on this plane of existence to ensure the well being of those who have passed who is usually a deceased loved one. In the past, these individuals have come under severe scrutiny as far as the veracity of their gifts. Today however science is beginning to shed light on the possibility, even the probability that it may well be a reality that spirits communicate with the living. One of the strong proponents of this spirit/science connection is Mark Anthony, or better known as the Psychic Lawyer® (aka Psychic Explorer®). Join us as we discuss the question of what is a psychic medium.
What Are Psychic Mediums And Quantum Physics With Mark Anthony

Mark is an actual lawyer as well as a world-renowned psychic medium who can contact the dead and communicate with spirits. Anthony the Psychic Lawyer® He is an Oxford-educated attorney licensed to practice law in Florida, Washington D.C. as well as before the United States Supreme Court. He has been seen regularly on Television, as well as major talk radio shows. Mark has been a featured speaker at spiritual organizations such as the Edgar Cayce A.R.E. as well as many other prestigious associations and universities like Brown, Columbia, Harvard, and Yale. Mark is also an author with two award-winning volumes: the critically acclaimed best-sellers Never Letting Go and Evidence of Eternity.

Mark works with individuals and groups connecting them with loved ones in spirit. He is not only known to enlighten he also entertains and intrigues his clients and audiences. He has the wonderful ability to talk to spirits as well as remove fear and superstition surrounding spirit contact and the afterlife with the living. He also works with victims of crime, homicide, and suicide, helping to console them in their time of grief.

We speak with Mark about his journey as a lawyer and psychic and how he has evolved into the area of Quantum Consciousness and theories of humans as multi-dimensional beings.

Here are some of the questions that he answers in this entertaining and informative interview on this podcast What Is a Psychic Medium.

Join us on this episode of Unlocking Your Truth, What Is A Psychic Medium, when we speak with Mark Anthony the Psychic Lawyer® and learn all about how to talk to ghosts and how science is proving it can be done.

Am I Clairvoyant, Or A Psychic Medium? UYT029

Tips To Know If You Have You Experienced Past Lives

If you enjoyed this article or podcast, What Is A Psychic Medium, please let us know… Reviews on iTunes are extremely helpful amp; much appreciated! Or simply send us a Review by email

For UYT episodes to be sent directly to your device, subscribe to iTunes, Player FM, Blubrry, or Stitcher! And lastly, if you have a topic or question for the show fill out the intuitive insight form on the right. Thanks so much!

Unlocking Your Truth is my weekly radio show where we discuss all things metaphysical like What Is A Psychic Medium! And much more! The show airs on CIVL 101.7 FM at 7-8 PM (Pacific Time) every Tuesday evening or live-stream the show at CIVL.ca. During each of our Unlocking Your Truth episodes, we also answer email questions from our listeners (click here to submit a question) as well as occasionally do readings live on air for our call-in guests. you can join the show live on our Facebook Group https://www.facebook.com/groups/288011298447383 or Youtube https://www.youtube.com/c/LesleyPhillips and ask your questions. Ask anything you want.